“If your dreams do not scare you, they aren’t big enough.”
-Yuroz

It has only been three short months since Yuroz finished the installation of his life-size Eternity sculpture for an international festival in Jimo City in Tianjin, the epic cultural center of Northeast China.

Only two years ago, we saw Yuroz rendering life-size Eternity images onto different backgrounds with Photoshop to present his vision to the staff. He had dreamed of putting this marquee symbol of humanity around the world as a reminder of the restorative power of eternal love and compassion between a couple to make a better world for ourselves and for others.

Due to the unusual and complex forms of this sculpture, it required tremendous extrapolation work for sizing to ensure piece parts fit properly. His degree in Architecture definitely played a large role in his ability to create all the necessary CAD drawings and the model in time for the build.

Yuroz arrived three days before the opening day of the show to participate in a conference devoted to the promotion of urban development through the fusion of monumental sculptures into cityscapes. His passionate speech about how great art invokes and stimulates our senses and breaks down barriers to build collaborations earned him not only standing ovation from the audience but also congratulatory invitations from key government bodies.

When recalling his emotions on the first sight of his life-size sculpture, Yuroz shared:

“It was a strange feeling to see my sculpture in such a faraway land. It felt like I met a family member, someone very close to me whom I hadn’t seen for a very long time. I know that I embarrassed myself when in front of everyone I hugged my sculpture and started whispering to it, talking to both ‘him’ and ‘her’.”

Yuroz was selected as a dignitary artist and was among the officials who opened the ceremony. He was also asked to conduct an educational children’s symposium hosted by the city and we captured below what Yuroz called “the best picture of the trip”.

One of the highlights for Yuroz was an afternoon of cultural exchange among professors of art in the leading art schools in Beijing and with other renowned artists from all over the world. Chinese calligraphy paper, Chinese ink and brushes were laid out with condiments and Chinese tea. Each artist was invited to use the supplies to leave an artwork to the organizing body. Here Yuroz made history again as he created his first Chinese painting with Chinese calligraphy supplies.

“It was an incredible experience when a sculpture opened many doors to make friends and communicate with people with such diverse differences from another country using a shared language of emotion where together, we embrace the art of love and the love of art,” explained Yuroz. 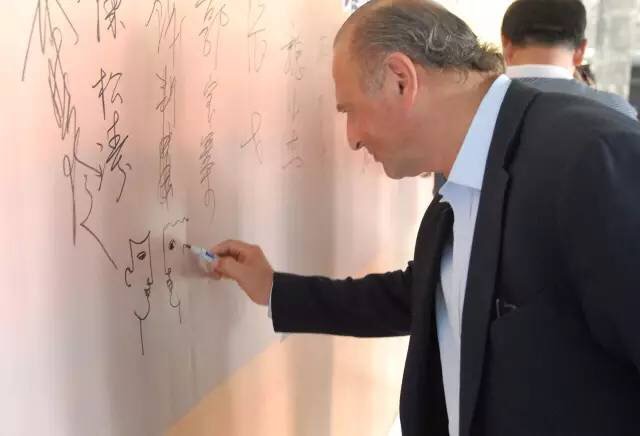 “Not only did I leave my sculpture behind, I also left many great friends there and I hope to see them soon. My goal is to install this sculpture in as many places as I can. To me, the Eternity sculpture has some kind of iconic energy and I feel that people need to be around it. They need to feel the strength and be reminded of the important of the human relationship,” concluded Yuroz.

We are currently working on a couple projects with Yuroz to bring the life-sized Eternity to the two coasts in the United States. Contact us to learn more.